New Branding Celebrates Propper’s Past – and Its Future New Branding Celebrates Propper’s Past – and Its Future

Propper International has manufactured tactical gear for the U.S. military since 1967, the year they earned their first Navy contract. But as the company moved into the law enforcement, public safety, private security and lifestyle realm, they needed to build a reputation on the commercial side of the tactical industry. Atomicdust was ready to help.

After doing some recon on the competition as part of our Branding Program, one thing became clear: companies in the tactical gear space are very visually similar, relying heavily on theatrically gritty, over-the-top hero shots and dark colors. It’s not uncommon for marketing within a tight-knit industry to start blending together, but it takes something new to be outstanding. And that’s what Propper needed.

The new brand identity takes Propper in a fresh and more commercial direction, while staying true to their proud military heritage. For us, Propper is an authentic, deliberate, quietly confident brand with gear that speaks for itself. Propper gear works right, right when it’s supposed to, whether you’re in the service, on the job, or off for the weekend.

The new tagline, Right to the Core, is all about Propper’s commitment to making essential, integral gear that stands up to any mission. For the people who wear Propper, it’s about protecting others and restoring order the right way, for the right reasons.

Propper’s new voice drove all of our designs. We were inspired by their iconic blue star logo, and incorporated its unmistakable color and angles into every piece of brand collateral. Sales slicks, brochures and other marketing collateral place the products front and center with generous white space and dirt textures for grit and balance, making everything feel both sophisticated and strong. We also refined the photography approach, reinforcing the brand’s authenticity with natural, unprocessed imagery that highlights the impeccable construction of Propper gear, and showcases actual professionals using it in real settings. The new Propper brand is truly representative of the company’s down-to-earth, straightforward culture. By taking a big step out of the tactical branding mold, Propper is now positioned for new commercial success. We’re proud to see that the entire company has really rallied around the new brand – that’s the greatest compliment we can receive as an agency. 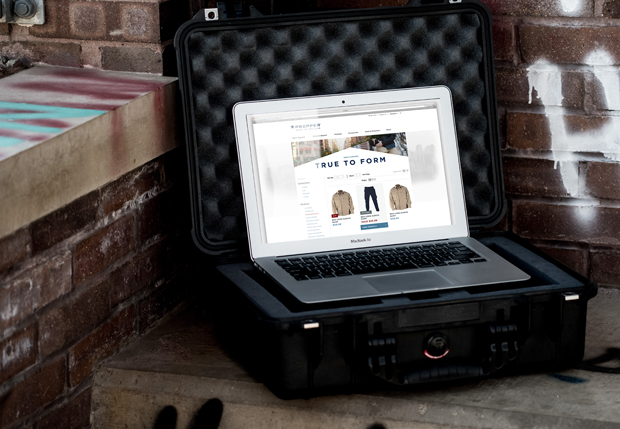 We have some exciting new work for Propper in the pipeline, so check back soon to take a look.